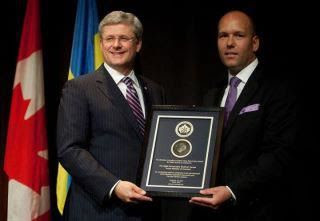 Prime Minister Stephen Harper, at an award reception in Toronto, reinforced Canada's opposition to the prison sentence given to a Ukrainian opposition leader.

Harper said he was "deeply concerned" by the case of Yulia Tymoshttp://www.blogger.com/img/blank.gifhenko during a speech Friday to the Ukrainian Canadian Congress where he received the Shevchenko medal, the organization's highest award.

Tymoshenko, a former prime minister of Ukraine and a driving force behind the country's 2004 pro-democracy Orange Revolution, was sentenced to seven years in prison on charges of abuse of power over a gas deal she signed with Russia in 2009.

Click here to read full article
Posted by Ukemonde at 9:18 AM