Ukrainian famine not a genocide

Alexander Solzhenitsyn is back at it spreading misinformation, read his latest outburst on Ukrainian famine not a genocide, and becoming another mouth piece for Vladimir Putin and his cronies.

After being such an ardent fighter for telling the truth and exposing the atrocities inflicted by the Soviet Union, in such works as, "The Gulag Archipelago." he has changed directions quite drastically.

Being awarded the Nobel Prize for literature in 1970, he has not received much acclaim since then.

The first sign of Solzhenitsyn turning to the dark side, speaking in terms of Star Wars, came after President Bush visited Ukraine and paid tribute to the victims of the Holodomor 1932-1933, he launched a memorably waspish attack on George Bush.

Solzhenitsyn's later statements have demonstrated an increasingly nationalist anti-western tone, and he appears to be a fan of President Vladimir Putin, who gave him a literary award last summer.

Funny how people can switch sides for the prizes they receive. I have a cracker jack surprise myself, which I would like topresent to this nobel literary laureate for his absconding from reality. To read more about the true facts of the Holodomor, please click here.

To finish off here is a self proclaimed quotation from the same man who seems to have changed his orientation and objective in life, go figure.........

"I have spent all my life under a Communist regime, and I will tell you that a society without any objective legal scale is a terrible one indeed. But a society with no other scale but the legal one is not quite worthy of man either."
Alexander Solzhenitsyn -

OTTAWA — The Canadian government moved yesterday to become one of the first in the world to recognize the 1932-33 Ukrainian famine, the Holodomor, as a deliberate act of genocide.

On a day when Prime Minister Stephen Harper's government marked the visit of the leader of the Orange Revolution, Ukrainian President Viktor Yushchenko, with elaborate pomp, it also took a historic step to acknowledge the millions who died in one of the darkest chapters of Joseph Stalin's Soviet Union.

Ukraine's quest to tell the world how its citizens suffered during Stalin's genocide comes to Ottawa. Catherine Lawson reports.

Posted by Ukemonde at 3:04 PM No comments:

The Holodomor International Remembrance Flame is traveling around the world.
Its Canadian itinerary includes a stop in Montreal.

It was very sad and discouraging to see the few people turn out for the ceremony to commemorate the victims of the Holodomor (Great Famine 1932-1933), in Montreal. This must be the first time I really felt such discouragement and questioned the fact of who was organizing this event. Who ever was involved did a disservice to the the whole Montral Ukrainian community.
The ceremony took over 2 hours and people who were speaking (invited speakers), all kept repeating themselves. The people who were there all knew what was the story and history behind the Holodomor. The goal of such an event would be to reach out to the people who knew nothing of this tragic event and educate them on this. The saddest part was the media coverage which was not evident at the scene of the ceremony. The coverage of this event after the fact was not heard of in print media or radio and tv. :-(
There were two bright spots to this event, the young students who put on a mise a scene and explained the whole story of the Holodomeor better than any of the speakers who performed before them. Too bad more than half the people left before their presentation, something that should have been first on the menu.
Also, a bright spot in the ceremony was 87-year-old Holodomor survivor Stefan Horlatsch who travelled with the International Holodomor Remembrance Flame throughout Canada. After being received by Premiers of the western provinces and finally reaching the final destination in Ottawa in front of Prime Minister Harper and President Yushenko of Ukraine, who was out there to greet him in Montreal from an official capacity, nobody!!!! Very sad indeed........
More to follow!!!
Posted by Ukemonde at 2:32 PM No comments:

An elderly Soviet war hero, Arnold Meri, has gone on trial in his native Estonia on a charge of genocide over deportations to Siberia in 1949. It is time for Ukraine and Ukrainian government to follow suit. There certainly are many NKVD and SMERSH members living on fat pensions in a country they pillaged and raped. Just go out on May day and they can be herded up and brought to justice.
Click here for full article on heroic steps taken on by Estonia. BRAVO!!!!

Canada to recognize Ukrainian famine as a genocide

OTTAWA -- Canada is poised to formally recognize as a genocide the 1930s famine in Ukraine that claimed millions of lives.

It's a shift from last fall when a government official said they had no plans to recognize the deaths as a genocide.

Liberal and NDP members have pledged support for the bill, which would also set aside an annual memorial day in November.

More than a dozen countries, including the United States, already formally recognize the famine as a deliberate attempt by the Soviet regime of Josef Stalin to eliminate ethnic Ukrainians and end their aspirations for independence.

But some academics -- and many Russians -- disagree.

But what else is new with Russia which remains in a state of denial about the horrific crimes their predecessors inflicted on millions of people throughout Eastern Europe and Asia, click here to see why.

Posted by Ukemonde at 7:20 AM No comments:

May 3: 87-year-old Holodomor survivor Stefan Horlatsch holds the International Holodomor Remembrance Flame, as members of Edmonton's Ukrainian community commemorated the 75th anniversary of the famine-genocide of 1932-33, at the Alberta Legislature. 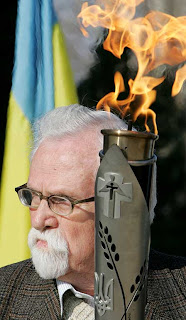 Posted by Ukemonde at 3:13 PM No comments:

An International Remembrance Flame to raise awareness of the 75th anniversary of the Ukrainian genocide known as Holodomor, or extermination by famine, and to gain formal Canadian and international recognition of this atrocity arrives in (Winnipeg on Sunday, April 20.)

The Flame tour honors the estimated 10 million Ukrainian men, women and children who were subjected to starvation and death in 1932 -33 by the communist regime of Joseph Stalin as part of his effort to eradicate Ukraine as a country

The Flame, visiting 33 countries, arrived in Canada from Australia on April 18.

The Canadian journey of the Flame entitled Keep the Flame Alive is being organized by the Ukrainian Canadian Congress in cooperation with the Embassy of Ukraine. Events will honour the victims of this horrific tragedy while ensuring that the story of the Holodomor is passed along from generation to generation.

Keep the Flame Alive will also launch a national campaign urging the Canadian government to recognize the Holodomor as an act of genocide.

The Flame will be escorted throughout Canada by Holodomor survivor and Toronto resident, 87-year-old Stefan Horlatsch.

More information on Montreal event to follow....
Posted by Ukemonde at 2:26 PM No comments: