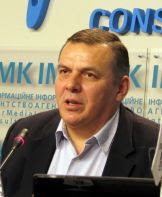 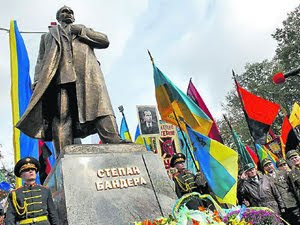 Discussions are also heating up over many other divisive issues. Those include whether elevating the status of nationalist leader Stepan Bandera (1909-1959) helps or hurts the cause of unifying Ukraine’s diverse regions. Debate is also flaring over the extent to which western Ukrainians were responsible for the demise of the region’s Jewish community during World War II, and why Ukrainians from the east do not appear ready to support the version of Ukrainian nationalism their western counterparts frequently offer.

The advent of a new pro-Russian government in Kyiv that looks ready to revise Ukrainian history in a way that is more acceptable to Moscow and often maligns western Ukraine has added urgency to this reassessment. There is a feeling that if western Ukrainians don’t soon come to terms with their own regional history, it will be too late to counter the theses forwarded by a less-friendly Kyiv.


One of the most widely debated topics these days is how western Ukrainians see Bandera, the man who led the more radical wing of the Organization for Ukrainian Nationalists. The movement was founded in 1929 with the goal of uniting territorially divided Ukraine and establishing it as an independent nation.

“Yushchenko, of course, acted very badly in that he accented historical memory (during his presidency) [concerning Bandera]. It is necessary to take a more serious stance toward history. ”

While many western Ukrainians admire Bandera for leading a movement that was able to withstand Soviet repression for more than two decades, not everyone agrees with the decision former President Viktor Yushchenko made earlier this year to bestow Bandera with the nation’s highest honor, the Hero of Ukraine award. They are concerned that the recognition was bestowed on the eve of the Jan. 17 presidential election – a vote that Yushchenko lost by a landslide, as predicted. The award has since divided Ukraine and allowed the region’s history and its historical figures to become objects of political manipulation.

“If you want to have a discussion in Ukraine, throw in Bandera and you will have soon it,” Yaroslav Hrytsak, a leading historian who heads the humanities department at Lviv’s Ukrainian Catholic University told an audience on May 11 during a discussion about World War II.

Click here for full article.
Posted by Ukemonde at 7:46 PM No comments: 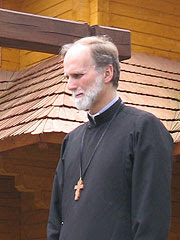 Source: RISU
Posted by Ukemonde at 6:44 PM No comments:

SBU pressure on the Ukrainian Catholic University in Lviv‏

Fr. Borys Gudziak received a visit from an SBU agent(former KGB)on May 18 in a polite manner the agent related that certain political parties are planning protests and demonstrations regarding the controversial (and in some cases inflammatory) policies of the new Ukrainian authorities. Students are to be engaged in these protests. There is a danger that some of these manifestations may be marred by provocations. He stated that, of course, students are allowed to protest but that they should be warned by the university administration that those involved in any illegal activities will be prosecuted. Illegal activities include not only violent acts but also, for example, pickets blocking access to the work place of government officials (or any protests that are not sanctioned by authorities).

With the collapse of the Soviet Union, the Ukrainian Greek Catholic Church became public and legal again. In 1992 the seminary resumed operations, though in a different location, because the Soviets had seized and reallocated all church property. The newly independent Ukrainian government offered the eparchy a former Pioneer (Scout) summer camp in Rudno, an adjoining suburb of Lviv. Since that time, the number of vocations to the priesthood has been high.

The seminary was re-opened but the former students of the late Cardinal Slipyi also longed to fulfill his dream a full-fledged Ukrainian Catholic University. Toward that end, they opened the re-named Lviv Theological Academy in 1994 which now provides the academic program for the seminarians. In November 1998, the revived Academy received accreditation from Rome to grant the ecclesiastical Bachelor's of Theology. In June 2000, ground was broken for a new Theological Center in the city of Lviv, which will combine the seminary residence and the University's theological faculty. 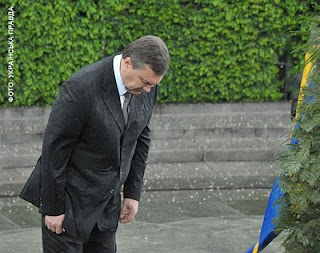 The two presidents took part in the ceremony to lay wreaths to the Eternal Flame on the Tomb of the Unknown Soldier in Kiyv’s Park of Glory. Afterwards, Medvedev and Yanukovych did the same near the monument to the victims of mass famine in 1932-1933. 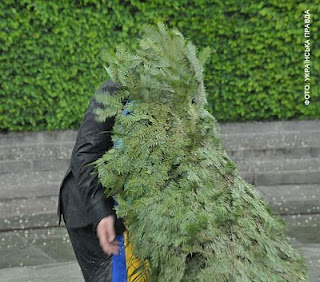 The ceremony was held under extremely unfavorable weather conditions: there was a very strong wind and it was pouring rain. Must have had all those dead souls howling at these two clowns trying to show their fake gestures, meanwhile not even acknowledging the Holodomor as a Genocide. The press service of the Ukrainian president asked the media not to post any videos or footage of the incident. Now that is what you call freedon of speech.

PS. We must not forget the great acting by Yanuk with the egg incident in Ivano-Frankivsk. 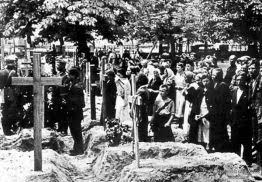 Source: Kyiv Post
Posted by Ukemonde at 11:51 AM No comments:

Victory Day I would not call it!!! 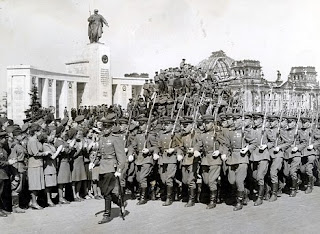 As the Red Army advanced toward Berlin in 1945 it had become a city virtually without men. Out of a civilian population of 2,700,000, 2,000,000 were women. It is small wonder that the fear of sexual attack raced through the city like a plague. Doctors were besieged by patients seeking information on the quickest way to commit suicide, and poison was in great demand.

The greatest crimes against women in history, was the mass rape of the conquered women of Europe after the Communist victory in 1945. The rapists were mainly Red Army soldiers, some of them non-White troops from the Far East and Central Asian Republics of the Soviet Union.

Soviet dictator Joseph Stalin authorised his army to look on women as spoils of war. Hitler's war had cost 22 million Soviet civilians their lives, often in barbarous circumstances. But few could have foreseen the extent of the revenge.

At least 2 million German women are thought to have been raped. One doctor deduced that of about 100,000 women raped in Berlin, 10,000 died as a result, mostly from suicide. An estimated 10 per cent gave birth. The death rate was thought to have been much higher among the 1.4 million victims in East Prussia, Pomerania and Silesia.

Former Soviet war correspondent Natalya Gesse recalled: "The Russian soldiers were raping every German female from eight to 80... It was an army of rapists."

Below you have links to sources that show this sad part of history. While these robbers / rapists celebrate victory day with all their medals in Red Square, I would like to honor the true heroes, the women who survived this barbaric onslaught by the army of rapists. 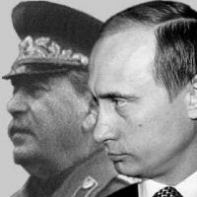 Let’s be perfectly clear: The people of Ukraine do not want union with Russia. The only reason new President Victor Yanukovich even has power is that the opposition camp was divided between two rival, fractious candidates. The violent reaction in the Ukrainian parliament to Yanukovich’s announcement of the Sevastopol deal shows clearly that Ukrainians want no part of Russian domination. But such sentiments did not stop Adolf Hitler, and they won’t stop Vladimir Putin either.

It is up to the NATO allies to stop him. As Yulia Latynina’s most recent Moscow Times column, which we republish today, makes clear, the NATO allies are sending disturbing signals that they will repeat the mistakes of Munich. It is up to people of courage and good will in the NATO countries to make sure they do no such thing.

Source: La Russophobe
Posted by Ukemonde at 10:16 AM No comments: 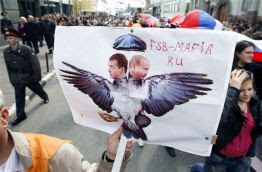 "Putin is Stalin! Putin is Brezhnev! Russia without Putin," chanted the crowd, including former chess master Garry Kasparov, one of the Kremlin's harshest critics who co-heads the democratic, pro-western Solidarity movement.

The opposition says Putin has stifled media freedom and democratic rights when he was president between 2000 and 2008.

They accuse Putin of blind economic policies -- similar to the years of stagnation under Soviet leader Leonid Brezhnev -- as he continues to dominate Russian politics after handpicking successor Dmitry Medvedev and becoming prime minister under him.

Source: Kyiv Post
Posted by Ukemonde at 7:00 AM No comments: