Now this is creative and hilarious!!! Merry Christmas to all the clowns in Ukraine's Verchovna Rada!!!!

KYIV — A journalist for national Ukrainian television sparked a scandal Tuesday by turning up at work in parliament dressed as a bunny in protest at the sometimes farcical behaviour of MPs.

Dressed head-to-toe as a white bunny with two huge ears comically sprouting from his head, Roman Vintoniv somehow managed to keep a straight face as he conducted lobby interviews with besuited lawmakers.

He said his action was a protest against the sometimes comic behaviour of lawmakers in the Verkhovna Rada who last week exchanged blows in a bloody punch-up that wounded several lawmakers.

"If the Verkhovna Rada is turning into a circus, then this needs to be officially acknowledged and people need to dress appropriately," Vintoniv told the influential news website Ukrainska Pravda.

Ukrainska Pravda said the parliament press service tried to have him expelled on the grounds that his external appearance was not in line with the rules.

But his colleagues then pointed out that the parliament has no dress code and he was able to carry out his work, carrying out interviews with some MPs, video footage posted on the Internet showed.

However some of his normal contacts refused to talk to him, Ukrainska Pravda said.

Friday's brawl -- which saw punches thrown and chairs hurled -- was one of the worst for years in the Rada and started after opposition deputies blockaded themselves inside the chamber.

Kiev prosecutors Tuesday said they had opened a criminal inquiry into the fighting, which came amid a legal probe against former prime minister and opposition leader Yulia Tymoshenko.

Ukrainians regularly express exasperation over their notoriously fractious parliament, suspecting that many lawmakers act in the interests of local oligarchs rather than ordinary citizens.

Source: AFP
Posted by Ukemonde at 9:45 AM No comments: 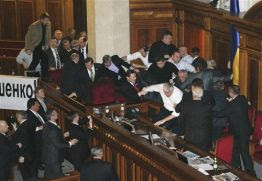