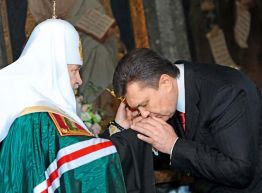 Yanukovych’s popularity suffered a double-digit plunge, according to an August opinion poll, as voters balked at tough austerity measures adopted by his ruling coalition in return for badly needed loans from the International Monetary Fund.

The nationwide poll, conducted by the Kyiv-based Razumkov Center Aug. 10-14, found that 22.5 percent of Ukrainians completely supported Yanukovych in August, down from 39.7 percent in May and 40.9 percent in April. According to the poll, 38.7 percent of those surveyed support some of his actions, while 33.3 percent don’t support him.

Regarding the upcoming elections, the president can be expected to use so-called administrative resources to help candidates whom he supports while hampering his opponents' chances, Fesenko said. Similar tactics were initially used by Russia’s Vladimir Putin in his building a managed democracy, Fesenko recalled.

While Yanukovych and the Party of Regions may be going down in the opinion polls, one has to wonder if the spark is still there in the people of Ukraine to make a change.

There are serious questions that are afoot regarding the legitimacy of the current government and parliament, unfortunately, is there a critical mass large enough to make changes in Ukraine before it is too late?

Or will we be in a position where those who really care about the country be battling a regime from beyond its borders?

Just a few things to think about!

I think with a few more move the people will definately get turned off and will do something about it. Just to think of all the babushkas that were fooled by this crook of a president, the gaz prices going up, pension age for women going up, all I see is Yanuk really to GO DOWN!!!!